The day of October 23, 2019, marked the 17th anniversary of the seizure of the Dubrovka Theatre Centre. The terror act, also simply referred to as the "Nord-Ost", took place in Moscow, on October 23-26, 2002. A group of armed militants led by Movsar Baraev took 916 hostages. In exchange for their lives, the terrorists demanded an immediate cessation of hostilities in Chechnya and the withdrawal of federal troops from the republic. The demands of the militants were not satisfied. After almost three days, law enforcers carried out the rescue operation, during which, according to the official information, 130 hostages, including 10 children, were killed, and more than 700 other hostages were injured. During the rescue operation, 40 militants were killed.

Of the deceased hostages, five persons were shot dead before the assault, and the rest died after the rescue.

During the assault, special gas was used to make sleep members of the terrorist grouping.

On March 9, 2017, during a trial in a case against Chechen native Khasan Zakaev, one of the suspected organizers of the terror act, a public prosecutor said that if there had not been the assault on the Dubrovka Theatre Centre, then "there would have been no casualties." Thus, in Russia, it was for the first time mentioned officially about a cause and effect relationship between the assault and the deaths of the hostages, advocates representing the interests of the victims emphasized.

In 2003-2007, by the decisions of the Moscow City Court, six accomplices of the terrorists were sentenced to 8.5-22 years of imprisonment.

On November 22, 2002, the General Prosecutor's Office announced the involvement in the terror act of Chechen natives Aslan Murdalov and brothers Alikhan and Akhyad Mezhiev, who were detained the same month for a car explosion near a McDonald's restaurant on October 19. Later, Aslanbek Khaskhanov, the leader of the grouping, and his accomplice Khampash Sobraliev were detained. In 2004-2006, all four defendants were sentenced to 15-22 years of imprisonment in a high-security penal colony. 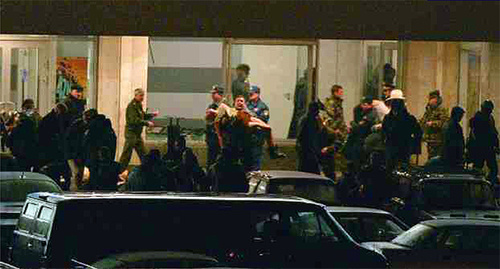 On June 20, 2003, the Moscow City Court found Zaurbek Talkhigov guilty of aiding and abetting terrorism and hostage-taking at the Dubrovka Theatre Centre and sentenced him to 8.5 years of imprisonment. According to investigators, the defendant used a mobile phone to hand over to the militants the information about the location of special force fighters.

On October 22, 2003, charges in absentia with organizing the terror act were brought against Chechen natives Shamil Basaev, Gerikhan Dudaev, and Khasan Zakaev. Zelimkhan Yandarbiev, who stayed in Qatar, was accused of aiding and abetting the terrorists. In 2004, Zelimkhan Yandarbiev was killed in a car explosion in Doha. Shamil Basaev was killed in Ingushetia in 2006.

In March 2017, at a trial in the case against Khasan Zakaev, advocates representing the interests of the victims demanded to invite to the trial the medical experts who concluded in relation to the deceased victims that there had been no direct connection between the use of the gaseous substance and the consequences, i.e. the deaths of the victims. However, the advocates' request was dismissed. There is still no answer to the question of which gas was used during the assault. At a press conference "White Spots", advocate Karinna Moskalenko said: "That violates the victims' right to privacy. They have the right to know the composition of the gaseous substance, since the fate of the people changed dramatically. The case is full of blind spots: it is not known who died for what reason; who entered the headquarters; and who made decisions about the use of gas?"

On March 9, 2017, a representative of the authorities of Russia for the first time announced the presence of "casualties during the course of the special operation at the Dubrovka Theatre Centre." "Russia for the first time recognizes the presence of casualties during a special operation. This is a real breakthrough in the case on the terror act," said advocate Maria Kurakina in a conversation with the "Caucasian Knot" correspondent while commenting on the statement voiced by the public prosecutor.

On December 17, 2014, the newspaper "Kommersant" reported that the Investigating Department for Moscow of the Investigating Committee of the Russian Federation (ICRF) resumed the investigation into the criminal case on the seizure of the Dubrovka Theatre Centre after an arrest of Khasan Zakaev, a 41-year-old native of Chechnya, one of the suspected organizers of the terror act, who had been wanted for 12 years.

According to the investigators, Khasan Zakaev, together with Shamil Basaev and Gerikhan Dudaev (wanted), was one of the co-organizers of the terror act at the Dubrovka Theatre Centre. According to sources of the newspaper "Kommersant", Khasan Zakaev, being a member of a criminal grouping, organized by Shamil Basaev, was responsible for delivering weapons, explosives, and so-called "shakhid's belts" to Moscow.

On March 21, 2017, the Moscow District Military Court pronounced the verdict against Khasan Zakaev and sentenced him to 19 years of imprisonment in a high-security penal colony.

On December 20, 2011, the European Court of Human Rights (ECtHR) pronounced a decision in the case of "Finogenov et al vs. Russia". The ECtHR unanimously found the inadequate planning for the rescue operation and the absence of an effective investigation by the Russian authorities into the rescue operation and thus a violation of Article 2 (the right to life) of the European Convention on Human Rights. The European Court awarded 64 victims with compensation in the total amount exceeding one million euros. Meanwhile, the ECtHR also unanimously did not find any violations in the decision of the Russian authorities to use gas during the rescue operation.

In February 2014, advocate Igor Trunov, who represented interests of the victims at the ECtHR, reported that 95 other victims also filed complaints to the European Court.

On October 23, 2014, on the anniversary of the tragedy, Igor Trunov told the "Caucasian Knot" correspondent that the consideration of all complaints filed by him on behalf of the victims to the ECtHR in the case of "Nord-Ost" was completed. "We won all the claims at the European Court. The execution of those court decisions is a personal matter of each of the victims, whose rights we defended, and I do not know how they receive their payments and how they dispose of them. At present, no one has contacted us for legal assistance in the case anymore," said Igor Trunov.

This article was originally published on the Russian page of 24/7 Internet agency ‘Caucasian Knot’ on October 23, 2019 at 02:28 pm MSK. To access the full text of the article, click here.