A participant of the second Chechen military campaign, one of the field commanders close to Shamil Basaev and Aslan Maskhadov. Shot dead in Berlin in 2019.

On August 23, 2019, Zelimkhan Khangoshvili was killed in Kleiner Tirgarten Park in central Berlin. While returning from the mosque, he walked along a forest path of the park, when a killer approached him on a bicycle, first shot in his back, then killed him with a control shot to his head. A Russian citizen was arrested on suspicion of the murder.

In Germany, investigators are engaged in verifying a version of the political motives for the murder, and secret services of a number of NATO countries do not exclude the involvement of Russian agents in the crime. A brother and a widow of the Zelimkhan Khangoshvili believe that the Russian secret services are behind the killing. Meanwhile, the widow claims that Zelimkhan Khangoshvili asked the Berlin police to provide him with protection, but his request was ignored.

According to a number of media reports, the German authorities may impose diplomatic or other sanctions against Russia if the Prosecutor's Office of Germany has evidence that the Russian authorities are involved in the killing of Zelimkhan Khangoshvili. Dmitry Peskov, the press secretary for the President of Russia, declared that the version of the German law enforcement bodies was ungrounded. However, on December 4, the German Ministry of Foreign Affairs (MFA) demanded from two Russian diplomats to leave the country.

In 2008 and 2012, it was reported that Zelimkhan Khangoshvili was affiliated with the Georgian secret services. In the first case, it was about the testimony given by Ramzan Turkoshvili, who was arrested in Chechnya as a Georgian spy, and in the second case, - about mediation in a story with hostages in the Lopota Gorge. The German Spiegel Online also reports that Zelimkhan Khangoshvili was an assistant to the Georgian law enforcement bodies in the fight against the Russian influence in the Pankisi Gorge. Moreover, according to his brother, after the change of the Mikhail Saakashvili's administration, since 2013, Zelimkhan Khangoshvili had no relations with agents of the Georgian authorities and secret services.

In 2015, an assassination attempt was made on Zelimkhan Khangoshvili in Tbilisi. On May 28, he was wounded in the Tbilisi District of Saburtalo with several shots and hospitalized to a republican hospital.

According to various testimonies, during the Russian-Georgian war, Zelimkhan Khangoshvili tried to help the Georgian forces by collecting from 50 to several hundred volunteers in the Pankisi Gorge. They used cars to move towards Tskhinvali to join the Georgian troops, but they did not have time for that, since a retreat began.

After the killing of Zelimkhan Khangoshvili, the "Interfax" reported with reference to its source that since 2008, his activities were investigated by Ingush Centre for Combating Extremism (CCE, also known as Centre "E") of the Ministry of Internal Affairs (MIA). According to the source of the "Interfax", in May and August 2003, Zelimkhan Khangoshvili participated in attacks on convoys of federal forces on the road between the villages of Alkhasty and Galashki in the Sunzha District of Ingushetia, as a result of which 15 soldier were killed. 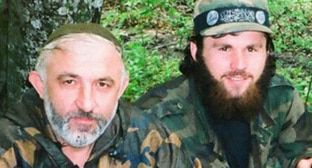 Besides, according to the source of the "Interfax", on June 21-22, 2004, Zelimkhan Khangoshvili participated in the attack on public officers of Ingushetia, when 98 people were killed, including 67 law enforcers, and 104 others were injured.

This article was originally published on the Russian page of 24/7 Internet agency ‘Caucasian Knot’ on December 6, 2019 at 12:51 pm MSK. To access the full text of the article, click here.